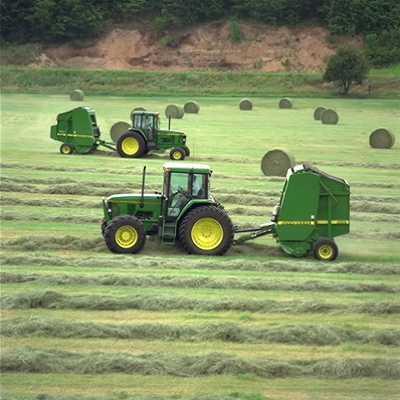 One of the most economical hay production packages is large round bales. This is primarily because of low labor requirements. A survey of farmers in southern Kansas found that 72% used large round bales as their primary hay package.

Harvesting hay with a large round baler requires specific management practices to maintain hay quality and minimize loss during harvest, transportation and storage. Large round bale packaging systems allow one person to harvest, store and feed large quantities of hay. Proper management is required to maximize effectiveness because losses from baling, transporting and storing large round bales can far exceed the losses with rectangular bales. When considering hay packaging systems, determine the desired package shape for the targeted user before selecting a system.

Hay producers select large round balers over small rectangular balers because of their high capacity, lower cost and lower labor requirements. With properly sized equipment, one person can usually bale, store, and feed all the hay for an average size operation.

Power required for a large round baler varies with the size of baler, size and density of bale formed, rate of forming and contour of the field. As a rule of thumb, the smallest balers require at least 40 horsepower and the largest balers require 100 horsepower or more. For safety reasons, the most important consideration when matching a tractor to a round baler, is tractor size, not horsepower.

Most large round balers are designed to minimize hay loss. A typical system will have a dedicated bale chamber and very close belt spacing. In a fixed chamber baler, hay rolls inside the chamber until it is full. These bales tend to have a softer core. The fixed chamber is normally confined by belts, chains, rollers or drums. In a variable chamber, flat belts or chains with slats contain the bale from its initial formation until completion, and can make a bale with uniform density throughout.

Large round balers come in a wide range of sizes. The smallest balers produce a full-sized bale that is approximately 4 feet wide by 4 feet in diameter. The largest balers make bales that are 8 feet wide by 6 feet in diameter. Bale weights vary from 500 to 2,500 pounds in properly conditioned hay. Bale weights will also vary with the type and/or species of forage begin harvested.

When selecting a wrapping system, keep in mind what type of large bale storage you will be using for a majority of your large bales: indoor vs. outdoor storage and outdoor covered vs. outdoor uncovered. An operator has several options when comparing twine, net wrap and plastic wrap. Solid plastic sheeting around the bale's circumference will reduce outside storage losses by shedding water. Wrapping bales with ultraviolet (UV) light-stabilized plastic can reduce dry matter (DM) losses to only 7% compared with 35% losses from unwrapped bales stored outside on the ground).

Porous net wraps shed water and permit greater air flow at the bale surface for less cost than plastic wraps. Net wraps applied during baling eliminate the need for twine. Studies show that net wrap reduces grass hay DM losses by as much as 32% compared with bales stored outside on the ground. When comparing losses of bales stored outside, the net wrap's effectiveness is between twine-tied and plastic wrap. Total baling cost per bale for an efficiently run operation is about the same as twine.

Cost per hour ($/hr) to operate a round baler is about the same whether the baler is operated at 605 of design capacity (ton/hr throughput) or 90%.

Cost per bale is calculated as: