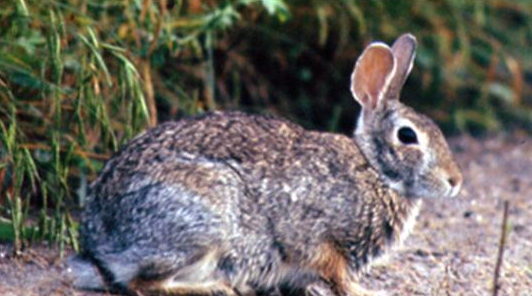 Cottontail rabbits are found throughout Kansas. Their light-brown upper body contrasts with their white fur belly. Long ears and stubby powder-puff tail are their distinguishing characteristics. Adult cottontail rabbits are 15 to 19 inches long and weigh 2 to 4 pounds.

Cottontails can very quickly multiply if weather, habitat or lack of predators allow. Cottontail rabbits produce an average of 3 to 4 litters of young a year, beginning in later winter and continuing into early fall. Females can breed immediately after giving birth. Leash laws restricting movements of dogs and cats, as well as laws prohibiting the use of firearms protect cottontails and allow their populations to sometimes grow unchecked.

When danger is spotted, they remain motionless, trying not to be spotted. If a threat comes too close, cottontails accelerate quickly, with large bounds to gain distance and run zig-zag course to escape.

Cottontails prefer brushy cover interspersed with open areas. Abundant growth during the spring and summer provides the rabbits with all the food and cover they need. In the winter, when food is limited, rabbits eat twigs and gnaw the bark of woody plants. This is why young trees and seedlings need to be protected from rabbits during the winter months. Landscaped yards provide excellent rabbit habitats.

Cottontail rabbits spend their lives in small areas of 10 acres or less. In good habitats, where cottontail rabbits are firmly established, efforts to permanently reduce the rabbit population generally are not successful. 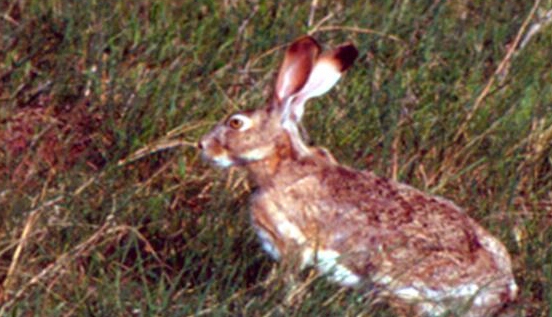 The whitetail jackrabbit is the largest hare on the Great Plains, having a head and body length of 18 to 22 inches and weighing 5 to 10 pounds. It is brownish gray in summer and white or pale gray in winter. The entire tail is white. The blacktail jackrabbit, somewhat smaller than its more northern cousin, weigh 3 to 7 pounds and is 17 to 21 inches long. It has grayish-brown body, large black-tipped earls and a black streak on the top of its tail.

The whitetail jackrabbit is found mainly in the north central and northwestern United States and no further south than the extreme north central part of New Mexico and southern Kansas. The blacktail jackrabbit is found mainly in the southwestern United States and the southern Great Plains, and no further north than central South Dakota and southern Washington.

Females may produce up to 4 litters per year with 2 to 8 young per litter. Reproductive rates may vary from year to year depending on environmental conditions.

Where food and shelter are available in one place, no major daily movement of hares occurs. When food areas and shelter areas are separated, morning and evening movements may be observed. Daily movements to 1 to 2 miles each way are fairly common. In dry seasons, 10-mile round trips from desert to alfalfa fields have been reported. Since jackrabbits reside in open range lands, they typically need to travel several miles from their dens to areas containing food.

When danger is spotted, they remain motionless, trying not to be spotted. If a threat comes too close, jackrabbits run away from danger in a straight line, relying on their speed (up to 40 miles per hour) to outrun predators.

Small trees or seedlings can be protected with cylinder guards made from small mesh hardware wire. These rabbit guards should be 18 to 24 inches high or higher depending on the average snowfall. Cylinders should be large enough around to prevent rabbits from reaching through and damaging trees and should be staked for support. Various paper and plastic wraps - including tin foil - can be placed directly around the trunks of small trees to prevent cottontail rabbit damage.

Along with exclusion, using wooden-cage traps is probably the most practical means of controlling problem rabbits in urban areas. Live trapping is less effective during the summer months because abundant vegetation makes with more difficult to lure them.

If live traps are used, place them in an area with a lot of rabbit activity, evidenced by tracks and gnawing on woody plants. Use live traps that measure 6 by 6 by 24 inches. To catch cottontails, the cage trap must be placed in or along the trails much made by rabbits using these areas. Opinions vary as to the importance of using baits, but some prefer to use the first one in the trap, leave it long enough to allow it to leave scent, but not long enough to stress the animal. Check traps daily. Lettuce, apples, carrots and corn are all good bait.

Rabbit repellents are often unsatisfactory for protecting plants from rabbits. The label restriction on most rabbit repellents limit their use predominately to woody plants and to the winter months when rabbits are most likely to cause damage. Snow and rain decrease their effectiveness. Repellents must be used according to label instructions.

Frightening devices, including electromagnetic and ultrasonic units, have not been proven effective in controlling cottontail rabbit damage. There are no poisons or fumigants for rabbits registered for use in Kansas.

Cottontail rabbits are classified as small game in Kansas, but currently they may be taken throughout the year with proper permits and within bag limits. See Kansas Statute - KSA 32-1002 for further information.

Rabbits are active year-round, and can be active day or night during summer or the warmer periods of the day during the winter. Therefore, rabbits and hares can cause damage any time of the year. During spring, rabbits prefer young, growing vegetation, like tulips, garden vegetables, clover and turfgrass. In winter, rabbits gnaw through the tender bark of young trees and shrubs to eat the green inner bark.

Jackrabbits also can cause damage to agricultural fields by "mowing" travel paths through crop fields and eating new shoots. Hares consume 1/2 to 1 pound of green vegetation each day. Significant damage occurs when hare concentrations are attracted to orchards, gardens, ornamentals or other agricultural crops. High jackrabbit populations can also damage range vegetation. Woody plants tend to receive significantly more damage from rabbits during winters with substantial snow. On open range lands, the greatest damage can occur during years of drought, synchronous with high populations of jackrabbits.

Tularemia is the most significant disease associated with rabbits. Tularemia is caused by a bacteria that can be contracted by humans through the bite of a rabbit, tick or flea or by handling the carcass of an infected animal. Symptoms in humans include: fever, swollen lymph nodes and swelling around the bite, typically appearing within 3 to 14 days of exposure. The infection is rarely fatal to humans provided victims receive antibiotics quickly. to reduce the risk of contracting tularemia, avoid direct contact with rabbits that are found dead, emaciated or exhibit abnormal behavior. Discard any rabbits with livers covered with small white spots. Otherwise rabbits, like most mammals can carry ticks infected with other tick-borne disease, such as Lyme disease.

Rabbits infected with the Shope's fibroma virus have fleshy finger-like growths protruding from various parts of their body. These growths occasionally make rabbits look like they have antlers and led early Europeans to believe that infected rabbits were a different species. This may have given rise to the mythical "jackalope." Whereas rabbits with  Shope's fibroma virus can raise concern among onlookers, it mostly affects cottontail rabbits and is not contagious to humans.