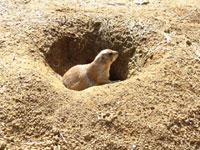 Before it was settled, most of Kansas supported grasses that tended to restrict prairie dog populations. Originally, prairie dogs thrived only in places overgrazed by native animals. Over the years, range lands were fenced, ponds constructed and large areas plowed. Remaining range lands were overgrazed and the prairie dog population expanded. Prairie dog management programs and control laws were implemented soon after, some of which remain in effect today.

Currently, prairie dogs occupy an estimated 130,000 acres of range land in Kansas. This is about1% of suitable habitat, leaving ample room for prairie dogs to increase in Kansas. During drought years, their numbers tend to increase with the decline of vegetation.

Black-tailed prairie dogs are large burrowing ground squirrels. They typically weigh 1 to 3 pounds and measure 14 to 17 inches long. Prairie dogs have reddish-tan fur, large eyes, small ears, a broad head and a black tip on the end of a hairy tail.

Prairie dogs live in burrows approximately 10 yards apart, 3 to 14 feet deep, and 10 to 100 feet long or more. A cater-like mound, 3 to 10 feet across and a foot or more tall at the entrance to the burrow prevents water from rushing in and serves as a lookout station. Most burrow systems have one entrance although some have two or even three entrances.

Prairie dog "towns" vary in size, from about 5 per acre in late winter to 20 per acre after the birth of young in spring. Some "towns" have been reported to hold up to 35 per acre during the spring time. Dispersal usually occurs in late spring. however, prairie dogs can increase the area they occupy by 50% per year.

Prairie dogs are typically active during the day. Not true hibernators, they may stay below ground for several days during cloudy and cold winter weather. Highly social, their groups are generally composed of one adult male, three adult females and six offspring.

Effects on the Range

Prairie dogs feed on many of the same grasses and forbs that are important to livestock. The effect on range land and livestock production depends on geographic location, rainfall, dominant grass species and other factors. Prairie dogs may improve forage, when plants clipped by prairie dogs stay in a "younger' stage of maturity, which is more palatable and digestible to cattle. In times of drought when less forage is available, competition from prairie dogs is more noticeable.

Though there have not been known human cases reported in recent years, in Kansas, human plague is a health risk for individuals involved in prairie dog management. The plague is transmitted to humans through bites of fleas that inhabit wild rodents infected with plague. Most human plague cases are related to direct contact with wild rodents. Early diagnosis and treatment are imperative. If concerned about possible contact in a suspected plague area, apply an insect repellent to socks and pant cuffs before tucking pants inside boots.

Numerous options exist for the management of prairie dogs. Kansas has 34 chemical products registered with the EPA for control of prairie dogs. When prairie dogs cause conflicts or damage, we should select environmentally safe and cost effective options.

Methods for reducing prairie dog populations or preventing increases include deferred grazing, shooting, poison baits and burrow fumigants. Techniques such as providing predator attractions or hiding places, using visual barriers or live trappings have not been effective in reducing prairie dog numbers. Use of vacuum devices or gas exploding equipment for destroying burrows are not legal in Kansas. For more information on prairie dog population management, please see the Prairie Dog Management Publications.