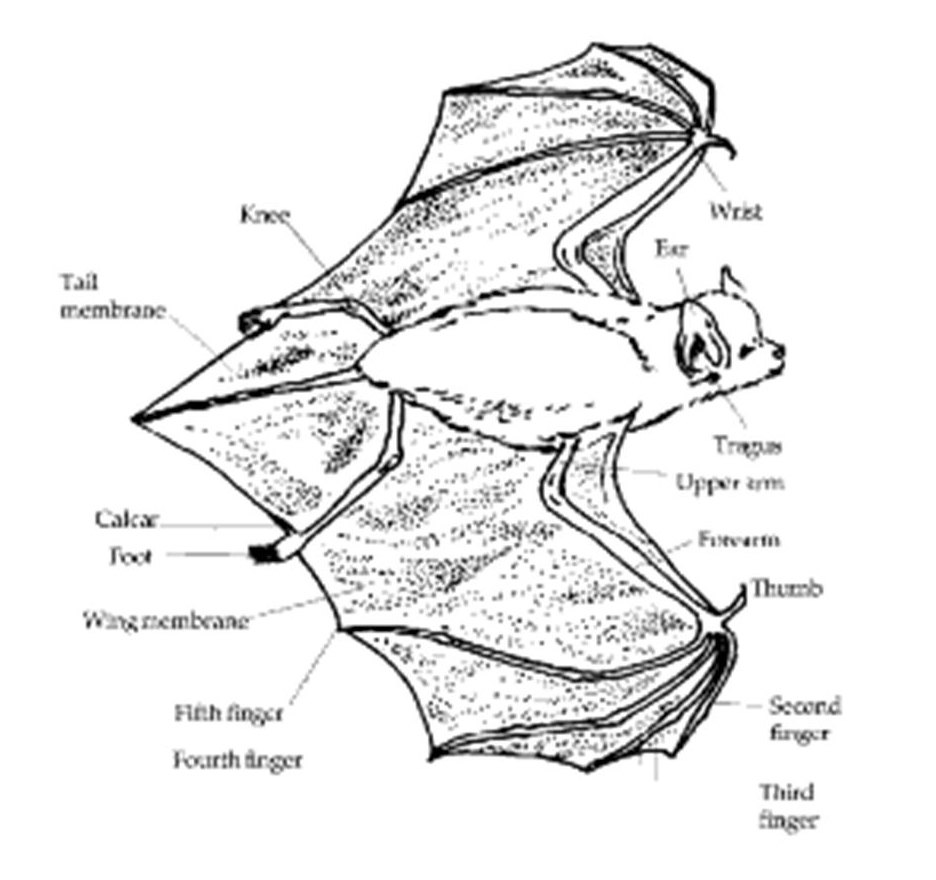 Of the approximately 900 species of bats found in the world, 45 live in the United States. Only 15 of those have been found in Kansas (see side bar for types). Contrary to popular belief, there are NO vampire bats in Kansas. All Kansas bats feed on insects.

Most Kansas bats are very small, with a body length of only 3 to 4 inches. The largest bat occurring in Kansas is the hoary bat, who's body is less than 5 inches long but has a wingspread of 16 inches allowing it to fly at speed in excess of 50 mph.

Bats naturally roost in the leaves of trees, in caves or under loose tree bark during the day, but many species prefer to roost in or around man-made structures. Depending on the species, bats become active during the twilight hours or shortly after dark. When bats leave the roost, they normally fly to a source of water before feeding. Some species feed occasionally throughout the night, but most feed around sundown and then again before daylight, using echolocation to locate insects. by the first frost, bats begin to prepare for winter. Some species migrate south.

Bats mate as they gather near caves in which they will hibernate. Although bats mate in the fall and winter, the females do not give birth until mid-May through mid-July. Most species of bats only give birth to one or two young. Young bats grow rapidly and most are capable of flight 3 to 4 weeks after birth. They are weaned 1 to 2 weeks later. Bats often live 10 years or more.

The only lasting solution to a bat problem is to physically bar their entry to the building or to their roosting areas within the building. This should be done after the bats have left on their evening feeding flights or after they depart for the fall. Be aware, bats are quite persistent, and it is often difficult to dislodge them from old, established roosts without eliminating their points of access.

Watch the outside of the house or building around dusk to locate areas where bats are exiting. After all bats have left the house, begin to close the openings. Because small bats can crawl through an opening as small as 3/8 of an inch in diameter, all openings such as cracks, vents or holes in the siding should be plugged or covered with ¼ inch hail screen.

Another suggestion for bat-proofing a dwelling is to install a "Constantine's bat-proofing valve." This device, which consists of a rigid base tube with an outer pliable sleeve attached is placed over the entrance hole allowing bats to exit the dwelling but not re-enter.

What about Moth Balls?

Many have heard the old method of using moth balls to detract bats from roosting. Napthalene flakes (ingredient used to make moth balls and cakes) are one of the few chemical repellents registered to repel bats from dwellings by private citizens. Three to five pounds of flakes (several handfuls of moth balls or a couple cakes) sprinkled liberally in a roosting area or hung in mesh bags will usually be sufficient for average attic or crawl spaces. However, all repellents are only temporary in effectiveness, at best and are a waste of time if not used in conjunction with bat-proofing measures.

To avoid trapping young bats inside the house, do not plug or cover all entrances from mid-May to mid-July. the best time of the year for bat-proofing a house is between November and March.

Harboring bats in homes and schools should be discouraged because on rare occasions a bat may develop paralytic rabies and fall within reach of children and pets. However, a house bat will typically not attack when molested, whether or not the bat is infected, but it will bite defensively if handled. Wear gloves and get an anti-rabies vaccine if you bat-proof when bats are present.

"Outbreaks" of rabies in bats are extremely rare or nonexistent. Only 1 to 3% of infected bats display evidence of "furious rabies", wherein they make unprovoked attacks. Most bites occur from handling sick bats and are "defensive" bites. If a person is bitten, the bat should be recovered (without damage to the head) and sent to a diagnostic laboratory for testing. If the bat is not recovered and tested, the person receiving the bite will need to seek immediate medical attention to begin anti-rabies treatment.

While rabies is a potential hazard with bats, the incidence of rabies in bats has mostly been exaggerated. During the past 30 years, only 8 human fatalities in the United States and Canada have been attributed to rabid bats. More people die annually from dog attacks, bee stings, lightning or household accidents then from bat-transmitted rabies.

Histoplasmosis is another disease humans may contract from bats. this airborne disease, caused by microscopic soil fungus sometimes present in association with bat droppings, affects the lungs with symptoms similar to influenza. To avoid contracting histoplasmosis, wear a respirator or approved dust mask while cleaning bat droppings in an attic or other structure.

If a wayward bat should happen to come into your dwelling - stay calm. The bat will often leave at dusk if doors or windows are left open. Don't try to capture the bat unless you are wearing heavy leather gloves or using a net.

Large numbers of bats are capable of eating tons of insects each year, making them beneficial to humans.

If bat droppings are present in any quantity, a dusk mast should be worn while cleaning to avoid breathing fine dust particles from disturbed droppings.

Bat droppings and urine yield a highly undesirable odor that is persistent and will attract other bats if the area is not properly cleaned. Noise is another problem often encountered with bats inside of dwellings. Numerous bats create substantial noise that can be disturbing to humans. However, bats cause little damage to dwellings or other structures.